Air pollution from agricultural sources: the elephant—or, is it a cow?—in the room

Breathing clean air is vital for healthy lungs. Every day, new research articles are published, telling us how indoor or ambient air contaminated with toxic particles and gases can affect our health. As respiratory health professionals, we are all aware of the health hazards from breathing air polluted by tobacco smoke, traffic, industry, biomass fuel combustion, or occupational sources. According to a recent WHO report, exposure to air pollution contributes to more than half of all deaths from acute respiratory infections in children under five years of age in low- and middle-income countries. Without fighting air pollution, all efforts to improve children’s health worldwide, such as vaccination, improved hygiene, better nutrition, will be much less successful.

Most people do not associate agriculture with air pollution. On the contrary, it has been well established that children growing up on farms have less allergies and less asthma than their rural or urban peers. I defended my PhD thesis ten years ago, showing that adult farmers who were highly exposed to microbial agents still had a much lower prevalence of hay fever and atopy than control workers with lower exposure levels. But despite the good news about allergies, there is a downside to this healthy farming myth. Farmers are also at risk to develop various lung diseases, including chronic obstructive pulmonary disease (COPD) and non-allergic asthma, as a result of breathing air polluted with particulate matter and microbial toxins.

But is this more than an occupational health issue?

Apart from large quantities of fine and coarse dust particles, farms also emit ammonia, a gas formed by bacterial enzymes in manure. Ammonia reacts in the atmosphere with combustion gases such as nitrogen dioxide to form secondary inorganic ammonium particles. As such, it contributes to fine particulate matter, or PM2.5, concentrations in the air. A growing number of studies have estimated that agriculture is one of the major contributors to PM2.5 in large parts of the world. The impact on morbidity, mortality, and health care costs has been estimated as well. Even the most conservative models with regard to particle toxicity have demonstrated that agriculture is the most important source of PM2.5-related mortality or morbidity in, for example, Europe, ahead of traffic exhaust.

For the last decade I have been studying the effects of air pollution from agriculture among people who are not farmers themselves, but who are living in a rural area characterized by the presence of many intensive livestock farms. Amongst others, we have set up a field work campaign to collect health data from 2,500 people. We found less allergies, but also an increased risk of pneumonia and exacerbations of COPD in people living closer to farms. Study participants had a lower lung function when tested after ammonia air pollution episodes.

So what needs to be done?

Improved emission reduction technology at the farm can help, but there are limits as to what technology can effectuate. However, reducing the number of livestock animals is a politically sensitive topic, as more sustainable farming methods are not always economically viable. Agricultural air pollutants such as ammonia and methane, a potent greenhouse gas, are often treated like the ‘elephant in the room’. The EU national emission ceiling (NEC) directive shows too little ambition or urgency for ammonia reduction, and has withdrawn the inclusion of methane. Environmental agencies in the EU, however, increasingly address the need to reduce those emissions.

As a scientific community, we need more awareness that agriculture can be a source of air pollution. We also need increasing awareness among physicians, particularly pulmonologists and general practitioners, about what environmental and/or occupational exposures are prevalent in their respective communities, in order to diagnose and advise patients accordingly, and perhaps even be active in influencing local or national authorities. Through ERS, I was invited to present the most recent insights in farm-related air pollution at the European Environmental Bureau in Brussels. In multifaceted societal problems like this, it is important that scientists can advocate the public health perspective and emphasize the need to reduce air pollution from all sources. ERS and the European Lung Foundation (ELF) offer valuable support through the ‘Breathe Clean Air’ theme of the Healthy Lungs for Life campaign focusing on prevention of lung disease.

Dr. L.A.M. Smit is an epidemiologist and Associate Professor at the Institute for Risk Assessment Sciences of Utrecht University, the Netherlands. Her research and teaching focuses on environmental and occupational epidemiology, with a strong interest in respiratory health and molecular epidemiology. She is a member of ERS since 2007. 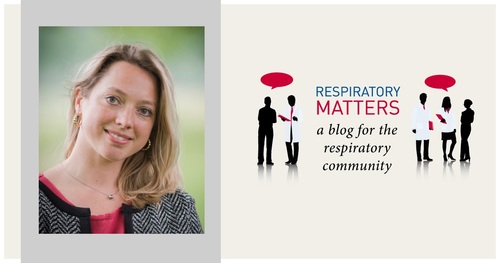